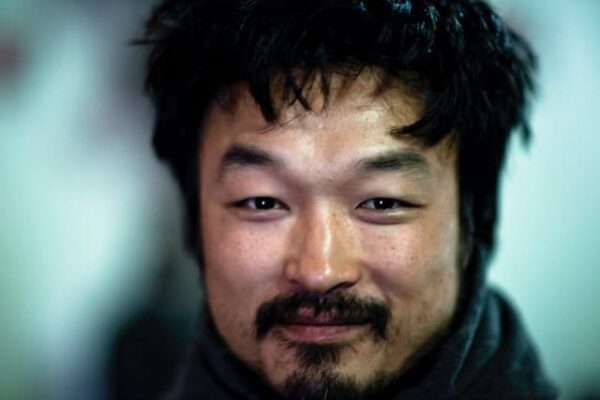 Ins Choi was born in Korea but grew up and currently lives in Toronto, Canada with his wife and two children. Some of his theatre acting credits include Banana Boys, lady in the red dress (fu-GEN); Hamlet, The Odyssey (Stratford Festival); Alligator Pie, Death of a Salesman (Soulpepper).

As a writer, his debut play, Kim's Convenience, won the Best New Play Award and the Patron's Pick at the 2011 Toronto Fringe Festival. It then launched Soulpepper theatre company's 2012 season, toured across Canada, and was adapted into a TV series of the same name on the CBC and Netflix for 5 seasons. Ins was a writer, executive producer and co-creator of the TV series. His next play, Bad Parent, is being produced by the Vancouver Asian Canadian Theatre company for the spring of 2022 at Prairie Theatre Exchange, at the Cultch and at Soulpepper.

I think the initial impulse was to create some sort of game, like Monopoly, where players kept going round and round and nothing really changed and there was no point... wait a sec, that is Monopoly. That idea morphed into this poem. It’s a bit of nonsensical fun but touches on some themes in Ecclesiastes. I grew up on Dennis Lee (Alligator Pie) poems and hear his influence here. The first read is at 90 beats per minute, the second at 110 bpm. I dare anyone to beat it.

It’s like a bare-assed bear who was embarrassed for his lack
of hair who then went off to who-knows-where and found a hare
that matched his hair who sounded hounded, quite astounded,
pounding grounds that were unfounded, when the bear proposed
to wear the hare as his new derry-hare.

It’s like a can of peas
Under a canopy of trees
That cannot see the Pleiades and so believe it cannot be.
But when all the leaves that make that canopy of trees begin
to fall it opens up to all and not just like a conference
call with protocols and wherewithals at City Hall or shopping
malls that clog up like cholesterol but opens up like
waterfalls of space to see the overall in place which can
appease that can of peas to then perceive the Pleiades.

Ecclesiastes 3:5 confused me and so I dove down the rabbit hole of online commentaries and YouTube sermons and came up with this. My intention isn’t to disrespect scripture or academia but to have a little fun and take some of the piss out of that sometimes stuffy world.

“A time to cast away stones, and a time to gather stones;”

Yeah, I don’t get it. I have no idea what this verse is talking about. Next. Kidding. Kinda. Not really. Well, “Cast away stones? Gather stones?” What are we talking about? First of all, how big are these stone? Cuz that sounds like a lot of work if they’re big. Well, how big are stones compared to rocks? I mean, geologically speaking, Pebbles was Fred Flintstone’s daughter so, stone’s are bigger than pebbles but Fred and Barney Rubble worked at Slate Rock and Gravel Company, so, I’m leaning towards rocks then gravel then stones then rubble then pebbles. Bam. Got it. Whew! Now, moving on to more peripheral matters.

I assume it has to do with some sort of ancient Jewish agricultural practice, cuz most mysterious references in the Bible do. Either that or it’s about sex. But, I mean, the last time I gathered stones and casted them away was at the beach, skipping them with my kids. And yes, it takes “a time” to find the right kind of stone; thin but not too thin, circular and kinda big and heavy enough to fling but not too big and heavy. And if you don’t take “a time” to gather the right kind of stone, they don’t skip. You’re then just casting away stones with your kids looking at you wondering where the magic is. But I doubt that’s the meaning. I can feel me reading my meaning into the text, prioritizing how I experience the world over and above the context in which the writer and the first audience lived. Anyway, it’s just not good literary anthropological practice to be the standard by which all things are measured. Although, now I’m wondering if people skipped stones back then. There’s nothing particularly modern about skipping stones. Y’know, I could imagine Jesus skipping stones along the Sea of Galilee just before he walked on it or King David teaching kid Solomon how to skip stones along the Jordan river. He was good at flinging stones at giants, he could probably get a lot of skips with a properly shaped stone. But for some reason I kinda think kid Solomon might’ve had a tough time with skipping stones. Y’know because David grew up as the runt of the litter, as a shepherd boy and a song writer, for some reason, that combo paints a picture in my mind of a type of person with the subtle dexterity to be able to skip stones. Not everyone can. It’s not hard but it’s just one of those things that some people take to and others don’t. And with a royal silver spoon upbringing, I don’t know if kid Solomon did. I’m not knocking Solomon. It’s good that he possibly couldn’t. He was wise, he asked for wisdom, it brought peace and prosperity to the kingdom and enabled him to figure out who the real motherof that baby was. That’s a good thing.

If he had obsessed with my conjecture that he couldn’t skip stones, then, when God asked him what he wanted, instead of asking for wisdom, he might’ve asked for the subtle dexterity to be able to skip stones! And then where would we be?

Why would you cast away stones in the first place?

My sister is a bit of a hoarder. She still has a stone collection from when we went to Florida forty years ago. I’m sure it’s crossed her husband’s mind to cast those stones away. And I imagine you would have to cast stones away from your field before you started planting seeds if you were a farmer. Someone on the internet said you would cast stones into your enemy’s field so their crops wouldn’t grow. But then now you’re gathering stones from your field cuz someone did that to you? Serves you right. Another person wondered if these were precious stones, meaning, there’s a time of debt where you have to sell your gem stones, and a flush time when you’re gathering them. It was also a form of judgement, casting stones. And, of course, it definitely sounds like sex but then what the heck does gathering stones mean in that context?

This verse is part of a list that illustrates the seasons of human activities. The list is set up by the phrase, “To everything there is a season, a time for every purpose under heaven:” Also, the Hebrew word “Hevel”, usually translated as “meaningless” or “vanity”, occurs thirty-six times in this book. Meaning, it’s a big theme of the book. But that word literally means “vapor” and one Rabbi on the internet translates it as “impermanence”. So, one sobering conclusion could be that complete control of our lives and ultimate fulfillment in this life is an illusion. Nothing will completely satisfy the yearnings of our soul in this world. Learn to enjoy the moments as your life ebbs and flows. So... there’s a time to cast away stones, whatever that is, and try to enjoy it but don’t get too used to casting stones cuz it’s impermanent and now it’s time to gather stones. Hey! It’s not my fault and you’re not in control either. So stop griping about how good it was when we were casting stones a moment ago and get on board the gathering stones train. Look, if you hate gathering stones so much, don’t despair, cuz this too is impermanent and before you know it, we’ll be casting stones again. But don’t expect casting stones to give your life ultimate meaning, cuz you’ll only be setting yourself up for disappointment.

Yeah, still not sure but that’s what I’ve gathered and them the stones I’m casting.

This song emerged out of Ecclesiastes 3:18- 21 where humans are compared to animals. I’m glad I could include my kids on this. Personal favourite: A leash of foxes.

While meditating on Ecclesiastes 3:4, the news of the unmarked Indigenous graves broke and continues to break.

You wanna cry?
Go ahead, it’s okay
Cry
Yeah, right now
Open up and release what you keep holding down
Don’t be embarrassed
I’ll cry with you
Cuz that’s what time it is
It’s time to cry right now
It’s not time to figure it out or to fix it
Or to think
It’s not time to get over it and move on
There’s nothing to get over
And there's nowhere to go
So
Stay here
Feel sad
And cry
Cuz that’s what you do when you feel sad